The first history page gave a general history of the building and it’s contribution to the life of Beverley, this page is more concerned with the Playhouse as an entertainment Venue / Cinema / Theatre. With mains electricity not coming to Beverley until 1930 the Playhouse had to generate it’s own electricity, the first event in this saga was the great leap of faith by Mr Symmons & Mr Holderness to purchase a ‘state of the art’ generating plant for a temporary Cinematograph not knowing if it would be successful or if the corporation would grant them a long term lease.
The first motion picture show was on Monday 20th February 1911 as this front page advertisement 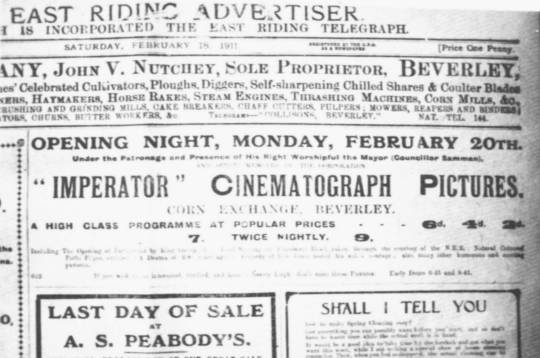 in a local newspaper shows, and consisted “A drama of 200 years ago, Opening of Parliament by King George V and Bird Nesting on Flamboro Head”.

From the very first year the Playhouse company ran local competitions, contests and events and also produced their own films of local happenings. The first Christmas season at the Playhouse saw the viewing of Edison’s film of Dickens’ “A Christmas Carol”, the inmates of the Workhouse were invited to see the film for free and were given sweets. This charitable attitude to people and local causes was to be a recurring theme throughout the life of the Playhouse.

In 1912 Mr. Symmons of the Playhouse made Beverley’s first comedy film: “Professor Swizzle, F.I.B.” and also this year the Playhouse was used for the opening meeting of “The Literary & Scientific Society” and a children’s beauty competition. The Picture Playhouse put Beverley in a unique position, it was the only Town in the Country with it’s own Newsreel service. 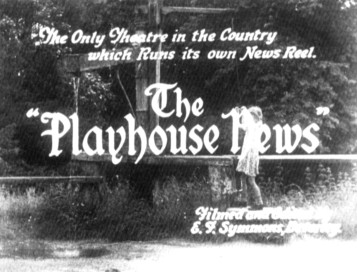 Even though Cinema going was becoming ever more popular, the Playhouse could always find time for charities and local causes, a slot was always found for a Music Concert, Carol Concert, an Award Ceremony, a Freedom of the Borough ritual and many others. Members of the Beverley Red Cross Old Peoples Club had free admission to films. 1925 – and the very first showing in this area of stereoscopic images ( 3D Films ) left audiences and other Cinema owners in awe. The Playhouse beat the other two Beverley Cinemas in February 1930 by showing the towns first “talkie” movies, but despite the advent of the talkies and their attendant amplified sound system, the Playhouse still continued with regular live music events, vocal, jazz, orchestral, comedy acts and of course endless charity functions and support for Beverley’s good causes. How could such a popular and busy place fit so much in ? – Midnight Matinees that’s how, parts or sometimes all of the proceeds from these very late shows ( often of specially selected films ! ) were donated to charities and local causes even augmenting the funds of the Beverley Memorial Hall ( which ironically in 2003 appears to be a rival to the Playhouse for funding ).

During the Second World War the Playhouse took on a new role, it became a church as well as a Cinema, during the dark winter months it was impossible to have an effective blackout on a church’s large windows, so late services were held in the Playhouse, records of sacred music were played through the theatre’s speaker system, the organist from St Mary’s played piano for the hymns and psalms, the choir sung from the stalls and the hymn words were shown on the screen, so popular did these services become that the place regularly filled to capacity and many had to be turned away. The good deeds and charity work of course continued with support for WVS Hospital helpers, War weapons week, Warship week, free viewing for locally billeted Troops of documentary War films such as “Desert Victory” special free screenings of Walt Disney’s Dumbo – for the children of prisoners of war ( in conjunction with the Rotarians and Citizens Advice Bureau ). Free admission to wounded servicemen and they were often supplied with tobacco & sweets, it’s a wonder the Playhouse didn’t go bankrupt.

After the war although no longer used as a church, everything else was the same, show films, host live events, support charities, have free screenings for various groups, make films of local events, and then in 1953 there was the Coronation, the Playhouse & Beverley Guardian organised a Coronation Year Baby competition which ran for a full 10 weeks before the Coronation and completed to coincide with the showing of the film “A Queen is Crowned”. 1954 and the Playhouse introduced Cinemascope to Beverley, it seemed to be the first with most things, always innovative.

Sadly Ernest Symmons died in February 1957 at the age of 74, but his widow Thelma continued the Playhouse tradition of generousity to charities and the community and despite declining attendances due to Television kept showing films until 1963. Bingo had been introduced to the Playhouse in 1962 in an effort to negate the losses generated by the Cinema and keep the building in use and the staff employed. In April 1972 Peter Robinson manager of the Playhouse Cinema and now Bingo Hall, placed an advertisement in the Beverley Guardian inviting people to help him form a film appreciation society, it worked, the society was formed and films were being shown at the Picture Playhouse again.

As you can see from just this short page, this Grand Old Lady of a building has done much for the Town and People of Beverley, now SHE needs YOUR help – join this group, or ring/write to a Councillor, write to a NewsPaper, make your voice heard. Help save The Playhouse as a Publicly owned community venue.